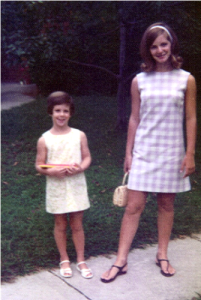 “The truth is sort of mysterious and sometimes has nothing to do with the facts.”  ~ Oliver Sacks

A recap from Love’s Thread . . .  My sister, during her visit after her death, was leaving me with some “very important” messages.  The first, Tomorrow you need to get up early, get the newspaper and look at the ads for houses to rent.  Look for the one that says four bedrooms in Kensington.  That is going to be where you will move.  Make sure that somebody calls about it even if you have to keep bothering them.  You will be able to go to the same school and stay near your friends when you live in this house.

The second, Things are going to get a lot worse with Dad for a little while and you will feel that you are alone.  You are never alone.  It doesn’t make any sense right now but this experience will give you tools to help other people when you are a lot older.  You will use all your special gifts to find the courage to move forward and teach others about forgiving and living with an open heart.

Tears were pouring down my cheeks as Diane stood and moved away from me.  It’s time for me to go but I will never leave you.  Love is the thread that keeps us connected always.  I begged her to stay but even while I sobbed, she continued to move, well drift, farther away.  She looked different.  It was as though someone had turned a light on inside of her and it streamed out in all directions.  Do you want to see where I am going?  You have only forgotten this place but it is your Home too!  She kind of swept her arm through the air and the wall of my bedroom started to move and swirl.  All of the tiny gold hairs stood up on my arms.  My head felt funny and there was a buzz in my ears that sounded like a sparkler on the Fourth of July.  It was as if someone tickled me all over, not too much, just enough to make me giggle and squirm.   Light as a feather, all floaty and happy. . . until I saw that I really WAS floating and there was light pouring out all around me too.  C’mon kid, we don’t have much more time.  Diane took my hand.  We are almost there.

You must seal these memories into your heart with Heaven’s breath and they will become a part of you.  With those words, there was a fullness in the air and a sweet melody filled me as my soul began to sing.  I heard the field of fiery golden wheat as it whispered joy and tasted like warm sunshine.  Sparkles of love passed through me masquerading as a peaceful, soft breeze.  This is just a little piece of my Heaven.  I know yours would have one of these.  A weeping willow appeared across the field of wheat.  Its leaves danced on branches full of grace.  Go ahead, give it a try.  I laughed and began to race toward the tree, carried along by love’s breeze, caressed by her tender hands before being placed gently beside my beloved tree.  Joy and light poured through me as I began to climb and Willow’s song became my own.

A shrill whistle interrupted our song.  I’ll bet you thought that you would never hear that again!!  Diane stood at the foot of my tree, dressed in torn blue jeans and barefoot.  Her blue eyes twinkled and she grinned.  The light around her expanded when she smiled.  Whoops, you noticed.  I will put it back for you.  Here, is this better?  Of course I had noticed.  The moment she showed her teeth, I saw the change to her signature smile.  She had chipped one of her front teeth opening a bobby pin a few years back and had always been self conscious about it.  When she first smiled, her front teeth were perfect but now the space was back.  Years later my husband would chip his own front tooth and whenever he smiled, my heart remembered and smiled too.  Diane had always told me that her whistle sounded better after she chipped the tooth.  No sooner had I thought this when she whistled again.  This time the shrillness was gone, replaced with a pleasing trill.  Its sound caused tendrils of joy to snake their way through my heart.  This is my new one.  I learned it here, its name is Hope.  It is how I bring Faith to me . . . Just remember, Hope and Faith are always together.  She knew that I didn’t understand why she had named a whistle.  Don’t worry about that now.  You will learn more later.  Right now, Faith will help you understand.

My eyes were drawn to the fog which rose above the wheat.  The mist droplets merged together but then they separated in the middle which created a path.  Faith carries me everywhere.  She will carry you too.  An equine beauty flew out of the mist at a full gallop.  Faith was magnificent.  Her muscles rippled through a shining coat of pure white.  Her fur became incandescent as she glowed with her own light.  Tiny crystals sent beams of color which beckoned to me.  Wait here, I will be back for you.  She started running and Faith ran beside her.  Diane reached up, grabbed handfuls of mane and still running, launched herself up and onto her back.  She only went a little ways before she circled back and Faith was flying toward me again.  Her hooves were bathed in golden sunshine from the wheat.  Reach your arms out to me and jump.  I will catch you.  You will know the right time and Faith will keep you from falling.

My heart knew that this was true.  I didn’t know about Faith but I knew Diane and she had caught me hundreds of times when I jumped to her in the pool.  I closed my eyes and used all my strength to propel me forward, arms and heart wide open.  Diane reached for me as I was flying through the air.  With my eyes closed, I saw the thread between us.  My eyes popped open and I felt many more connections.  There were thousands, maybe even millions, of glowing golden threads.  They pulsated as they carried their precious cargo.   I became part of everything and everything became part of me.  Each wave of light carried love to me.  Faith supported me and my arms found their way around Diane but there was no separation.  I was Diane but I was Faith too.  Simultaneously,  I was also the wheat, the dirt beneath it and the bugs that made their home there.  Willow was a part of me too, I felt her graceful branches as if they were my own.  I knew joy but most of all, I knew love because I WAS love.

Remember, there is nothing but love.  It is the answer to every question and solves every problem.  Love is all there is and everything is love.  I began to feel my body separate from Diane and separate from Faith.  I felt heavy and things started to fade away but the love remained.  Time isn’t real.  You will be Home soon and we will be together in the blink of an eye.  I am always with you.  You are never alone.

My face was wet and so was my pillow.  It had been a dream.  Even at ten, I knew that it wasn’t “just” a dream.  I also knew that I didn’t really understand everything that Diane had told me.  It had to be real because my chest and stomach didn’t hurt the way that they had since the day she died.  The secret was that she wasn’t really dead.  I was filled with love and knew that I would never be alone again.  As soon as my feet touched the floor, I tiptoed from my room to the front porch.

This morning everything stood out in vivid relief.  It must have been because I viewed them through the filter of love. Colors cascaded over top of one another, each maintained its own unique thread yet worked in combination with all others to weave a beautiful tapestry. I felt connected to every tree, every bird and even all the bugs.  The newspaper was hidden in the bush next to the porch.  For the first time ever, I was interested in looking at the ads in the back of the paper.  It only took a minute for me to find the rental section.  Four bedroom, two and a half bath, single family home in quiet Kensington.  Walking distance to area schools.  My parents were surprised that I had been looking at the paper but called for information later that day.  They were told that the house had been a parsonage but the new pastor had decided only yesterday to continue to live in his current home.  We were the first to call and it would be available at the end of the month.  All the rooms were to be painted and we could choose the colors.  On July 1st, we moved three blocks to our new home.

My room was the color of golden wheat and tasted of warm sunshine.

Remember, there is nothing but love.  It is the answer to every question and solves every problem.  Love is all there is and everything is love.

~ until our paths bring us together again ~